Couple weeks ago I decided to do something proactive on a weekly basis. This week, yesterday to be exact, I hiked to Planica pri Kranju, 824 m. Sure, it might not be that impressive for those of you who climb higher up, but hey, it’s exercise and I just started this month. Besides, so far my plan is not to go higher and higher (although I wouldn’t mind and it would be good for me to challenge myself), but then again this is more about pushing myself to do something that doesn’t just require me sitting in front of the computer or drawing desk all day long. Besides, since one of my favorite things to do is photography, among other things, this is great. I have always wanted to make better landscape photos or take that shot somewhere out and about.

So… yesterday I took a trip to a nearby hill. I live in Šutna, that’s about 10 minutes (drive) from Kranj and Škofja Loka. Instead of driving somewhere to start off, I decided to just walk from home. At first it was odd… people usually drive from home, not walk from it (or back for that matter). You know, the “age of cars”. Anyhow, as I was couple minutes into my walk, I started hearing gunshots. You might think, that’s odd, but not really. You see, there’s a military shooting range just bellow Crngrob village. “Darnit!” I thought. That’s gonna take a while and it’s going to be audible for kilometers. 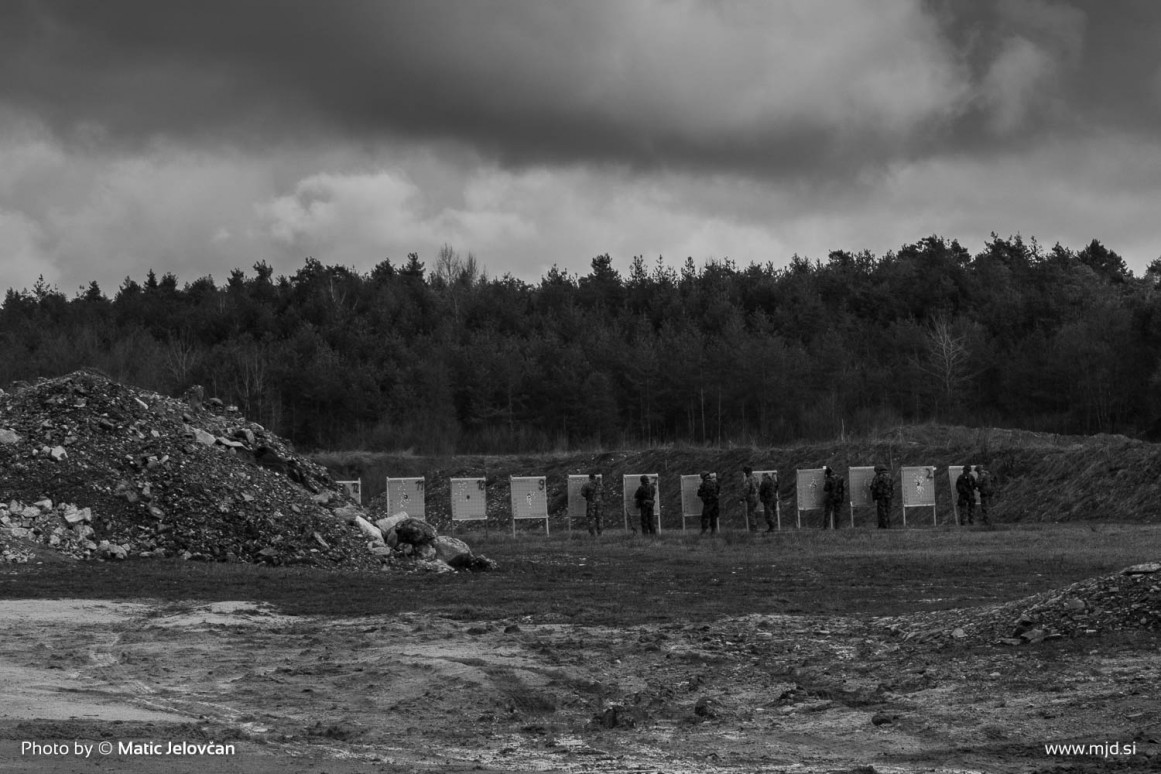 Going uphill to Crngrob I passed a friendly soldier, who probably in his boredom quarding an entry smiled back and said Hi. I replied and then thought to myself: “Should I go talk to him… there’s always a ton of questions, that I have for people on Government paychecks… oh well… I’ll live. There’s a hill to hike to.”

As I ascended to the Crngrob church, I noticed, that the building beside it (that had not been inhabited probably since WW II) is in a way worse shape as I remember it. I haven’t been up in a little bit less than a year. The building looked intriguing. After a short investigation, that occured upon getting my hiking poles out of my bag, I found out, that there’s even some windows missing and that there’s an opening upstairs that used to be closed. I calculated my risks as to whether it was safe to enter. The roof was still majorly intact… sort of… well, it wasn’t leaking where I was going to go, because the rot would have been visible by now. Also the floor on the upper level was supported by the pillars I saw down bellow earlier. That means, that whoever is storing miscellaneous items in the building must have done at least that much repair as to be able to walk around safely. Furthermore, the wooden slabs upstairs were thick enough to hold even if slightly rotten (about 2 inches). So I entered, but didn’t go too far as I was alone, and took a shot from the inside. That was forth it, I think.

From the inside of the building 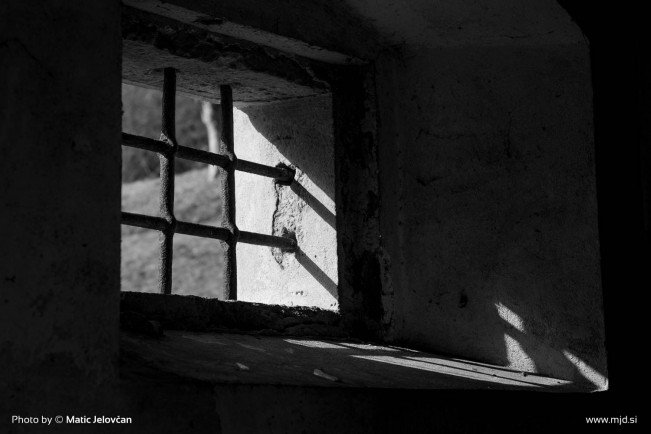 opening where there used to be a glass window, downstairs where the access was not possible to in the past. Nothing else worth seeing though.

As I was walking up the hill there was a couple times I wanted to take a photo, but I knew, that the camera in those cases would be unable to capture the magic of the moment, thus I continued on. I must say, that it was way easier to walk up this time than the last time. It wasn’t long till I reached Planica, the village. But where’s the top? I haven’t been up before. I walked into the village, but I thought: “Nah… this probably isn’t it”. So I went back and saw a sign showing up to the church. But where, there are two possible routes. Oh well, let’s try and I can always double back. So I went the less likely route (not what I thought about when I went there). That wasn’t it, but nonetheless there was a nice view from there. 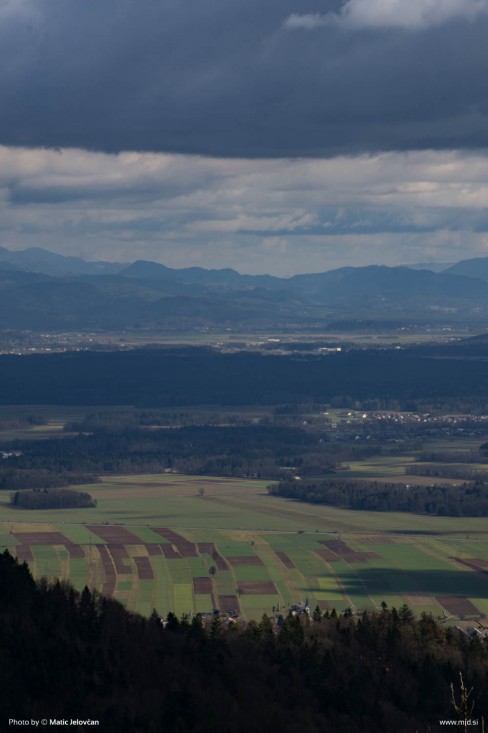 A nice view… but it’s going to get even better up top.

Light played some nice games on the other ridge. 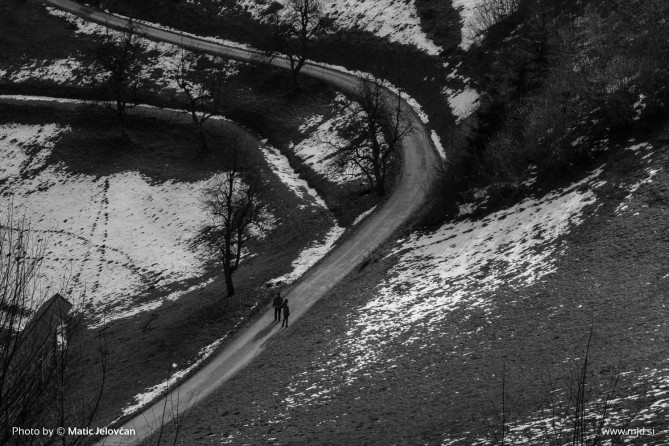 A couple walking up, that I met later on when I was already up… taking a different route though.

Still, it was a dead end. Probably only for farmers to mow the grass field. But there I am and I could probably go up the steep hill to the church. Nope. There’s fences there. What about the other ridge… yap. So I went into the forest, going steeply up on a probably rarely walked upon ridge. Soon I stumbled upon a way that I should have walked on in the first place.

Finally I was up. Nothing spectacular though. Too many trees blocking the possible views. That’s a shame. 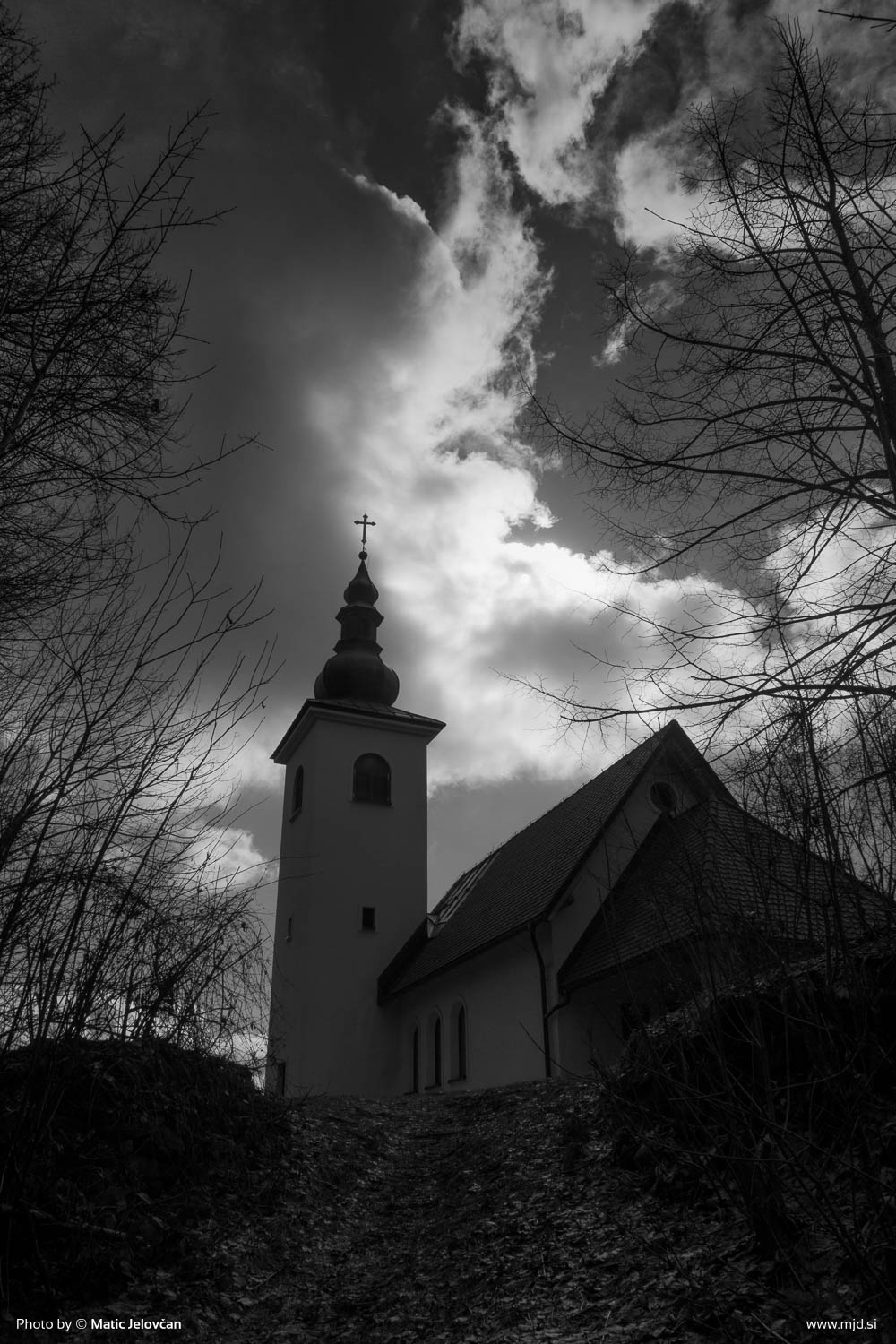 The church on top, dedicated to Archangel Gabriel and belongs to the Parish of Stara Loka.

So I ate my snack, had some water and tried what’s there on the other side of the Church. The couple that I saw earlier whilst taking the photo just came up as well. I hope they will check this website, that I invited them to check out as I talked with them. Anyhow, there were some better views, but still not good enough for the photo. Too many distractions, trees and power lines are just some of them. So I started going back, taking the longer route this time. Perhaps there’s going to be some better views from there. And surely, just couple dozen meters away it was.

Now a true panorama, where you could see all the way to Ljubljana, the main city of Slovenia.

I think panoramas can be well done even with tighter telephoto lenses in a vertical ways. 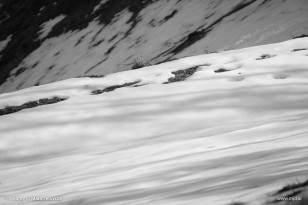 No snow down home, but up here it was still there. 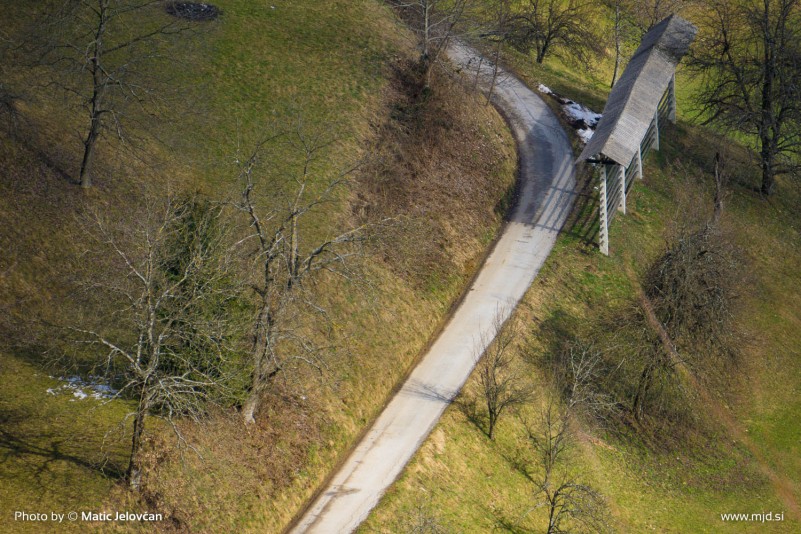 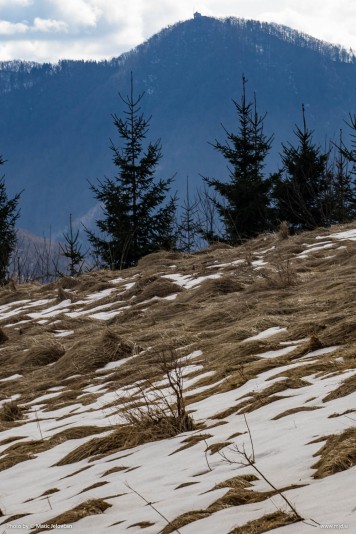 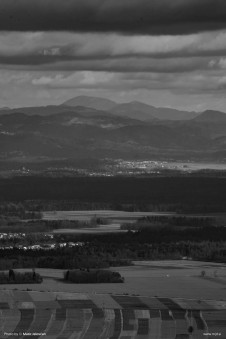 Another Vertical Panorama in Black-and-White,… I just love the lines it brings out

As I was going back down, there were more things to see. And because the Sun was further up, it played some more games were there was shade earlier in the morning. Also, there was another, possibly burnt down, building in the village of Planica with a cool window shot. 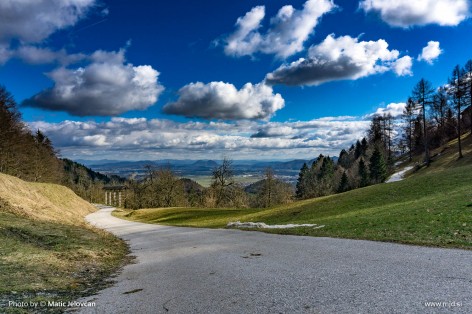 A tad more colourful than when going up. Clouds have cleared and sun is further up. 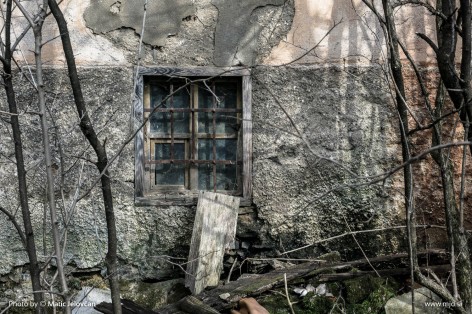 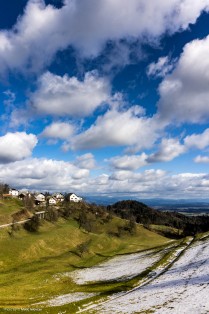 It looked just lovely, being lit by the sun even more. 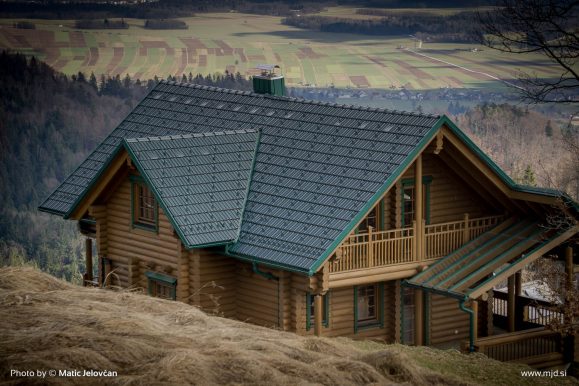 Some of you know that I love wooden and tiny houses. This one isn’t tiny in the slightest, but it is lovely. 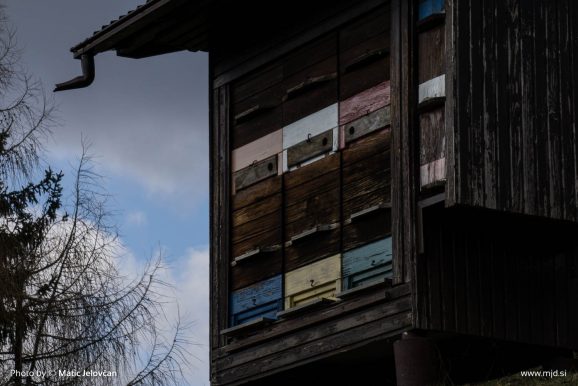 Last but not least, I thought of trying out a stitched photo of a tree with this cool bright moss on it. It just looked magical. I wish I remembered, I could take the same photo with my telephoto lens, to get a more pleasant bokeh. But then again I wanted to try the “fake medium format lens technique” by stitching an image together in Photoshop, made of 27 photos that were made with a 50mm 1,7 Minolta MD lens. 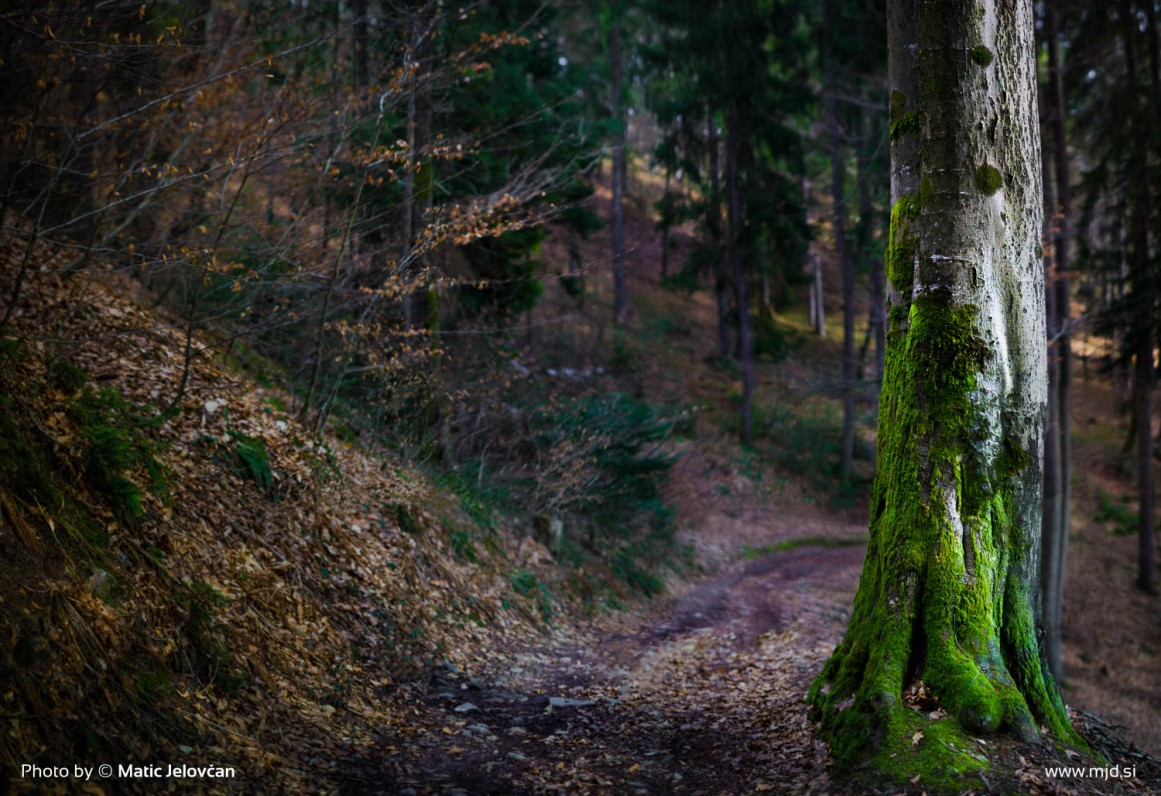 The fake medium format lens technique” by stitched image together in Photoshop, made of 27 photos that were made with a 50mm 1,7 Minolta MD lens.

Stay put for another set next week.